We are saddened to hear that Sr. Rosaleen Sheridan RSHM, our longest-serving Headmistress at Marymount London, passed away peacefully earlier this week in the RSHM Retirement Center in Tarrytown, New York. She was aged 88. 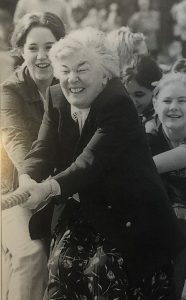 Born in Ireland on September 2, 1932, Sr. Rosaleen Sheridan was part of a large family of five brothers and three sisters. From a very early age she felt a great love for God.  When she turned 18, she decided to join the Institute of the Religious of the Sacred Heart of Mary. Reflecting on this life-changing decision, Sr. Rosaleen once said: “In my heart I knew I had a calling to give my life to God. I knew I only had one life, and that I would give it the best try I could.”

Sr. Rosaleen joined Marymount London in 1980. She taught psychology, conducted guidance and religion courses and was also a Boarding Moderator, before becoming Headmistress. In their yearbook dedication to Sr. Rosaleen, the Senior Class of 1985 said, “Sister’s devotion to Marymount has gained her the respect and love of faculty and students alike”. Sr. Rosaleen served as Headmistress of Marymount London for thirteen years, between 1990 and 2003. During this time, Sr. Rosaleen oversaw many developments to the campus, including the addition of the ‘Our Lady’s’ building (which now houses our wonderful Library), led the School through its 40th anniversary celebrations and was at the helm when we stepped into the 21st century. She was a powerful and lifelong advocate for the IB and was instrumental in ensuring that Marymount London was one of the first schools in the world to adopt the Middle Years Programme, which it did in 1995.

Mr. Marcou described Sr. Rosaleen as “someone utterly dedicated to the formation of the whole person. Sr. Rosaleen was, above all, an incredible example of the RSHM mission in action. She gave of herself and her many gifts with such love and kindness to all those who were lucky enough to be part of the community under her stewardship.”

Mrs. Langan, who joined Marymount under Sr. Rosaleen, said of her “She was a force of nature, passionate about girls’ education and had high expectations for her students and staff. This was all done with kindness, wisdom, good humour and a smile suggesting that she was determined to have some fun along the way.”

In the 1995 yearbook, on the occasion of our 40th anniversary in London, Sr. Rosaleen reflected: “the chain which bound each class was strengthened by the contributions of everyone in the group, and the heritage they left you will treasure and pass on, through your own excellence, to future classes.” As a community, we treasure her contribution both to the RSHM and to our school. We will endeavour to pass on, through the excellence of our students, the heritage she has left us. 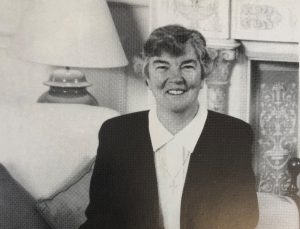 The Mass of Christian Burial at Marymount Convent will take place on Friday, April 30 at 11:00 am (EST). All are invited to join the Sisters for the live-streamed Mass on their Eastern American website (www.rshm-east.org).

Here in London, we are looking at how to best remember Sr. Rosaleen, and hope to update alumnae and staff in the near future. If you would like to share your memories of Sr. Rosaleen for Marymount Matters, please contact Adriana Williams, Director of Development, on devdirector@marymountlondon.com.